Hi, everyone! I’ve got another Christmas card to share today, it’s even another red one, I don’t really know what’s going on with me with all these red Christmas cards, but I’ve got blue ones coming! 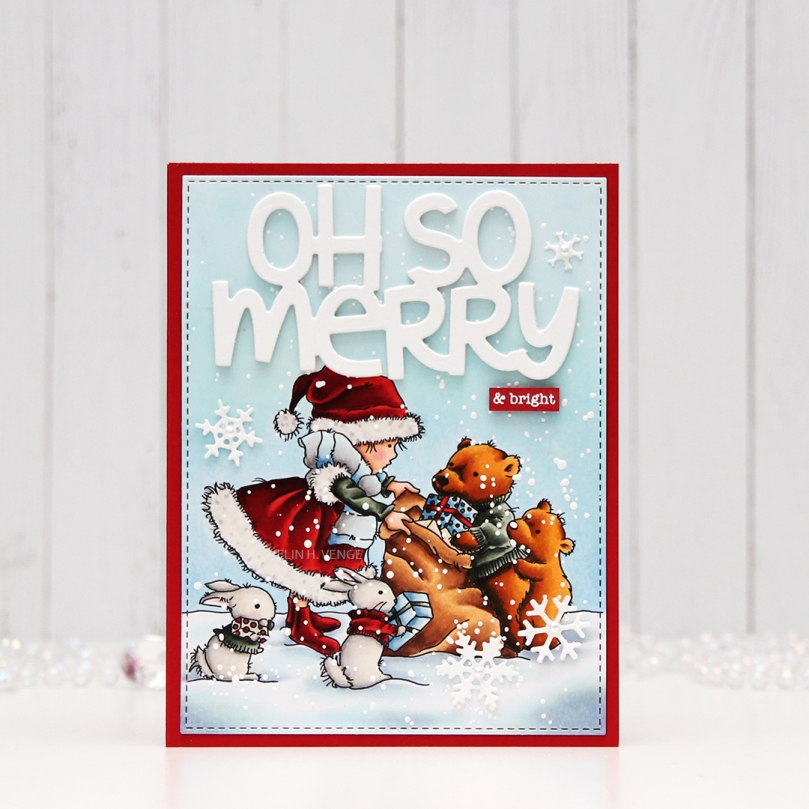 For today’s card, I used the image “A time for giving” from Lili of the Valley. Bears, bunnies and a cute little girl, I couldn’t resist. I printed the image onto X-Press It blending card and colored it with my Copics, before using a die from My Favorite Things to turn it into a panel with a nice faux stitched edge. 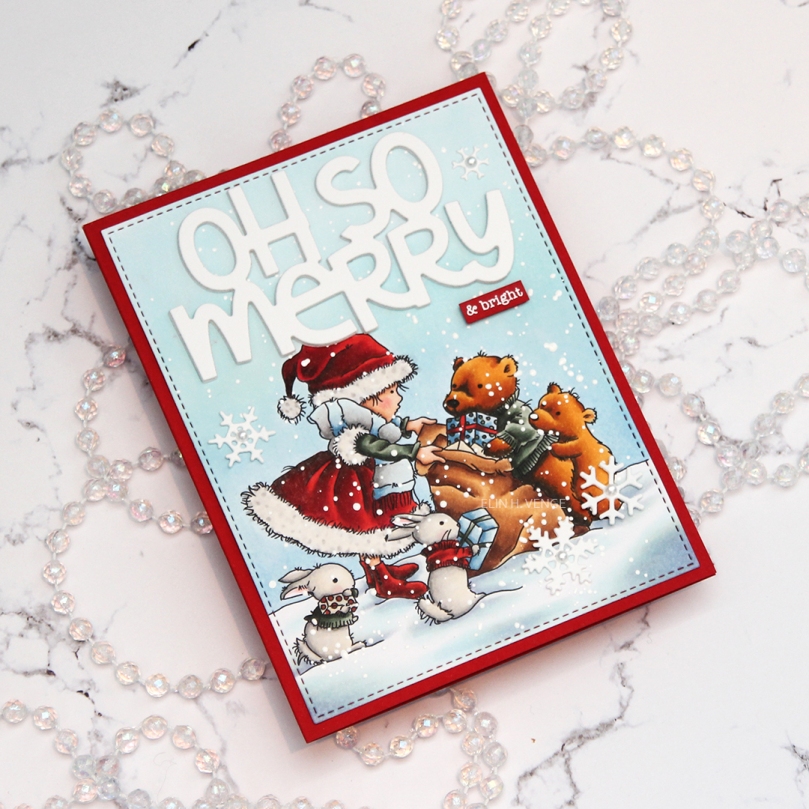 I die cut the words oh so merry from the Penguin’s Waddle die set from Mama Elephant a few times from white cardstock and stacked them for a dimensional look. I added chunky white embossing enamel to my scene, glued my panel onto a card base made from Pure Poppy cardstock from Papertrey Ink and glued my diecut words in the sky. I stamped and white heat embossed “& bright” from the Holiday messages stamp set from Mama Elephant onto a scrap of the same red cardstock and glued that below my diecut words. I added a few diecut snowflakes with pearls in the centers as my finishing touch.

Lots and lots of marker, many of them used on the snow, believe it or not. 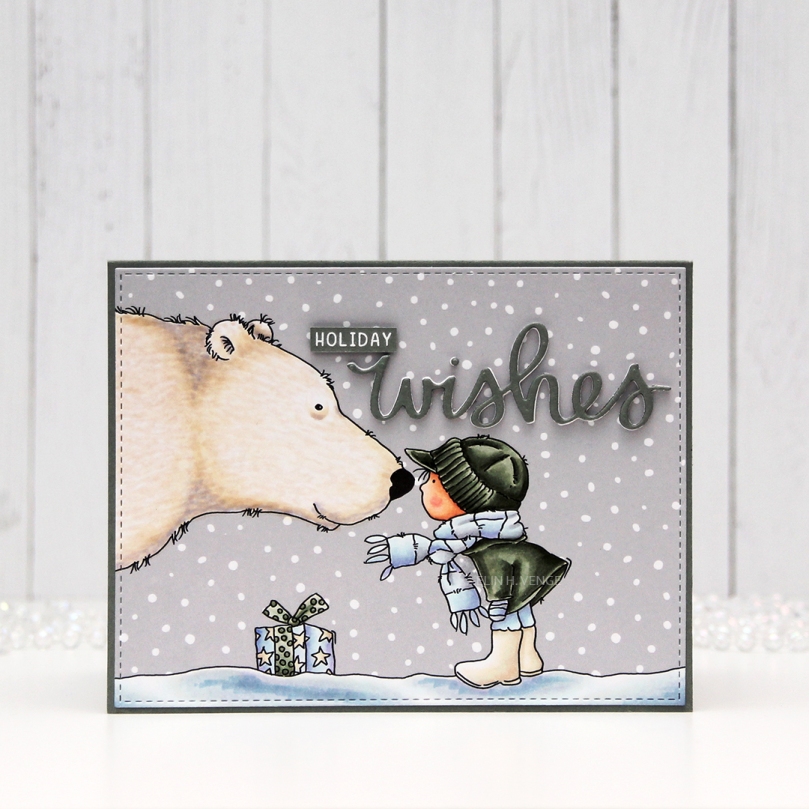 Once I’d colored the image with Copics, I used the largest die in the A2 Stitched Rectangle STAX Set 2 from My Favorite Things to die cut a landscape oriented panel that would fit perfectly on my card base with a 1/16″ border around. I like the 1/16″ little frame, AND it’s the same width as the distance from the faux stitching to the cut line. I like having them the same. Little details like that matter, to paraphrase a famous German architect (Ludwig Mies van der Rohe, who coined the term “God is in the details”). 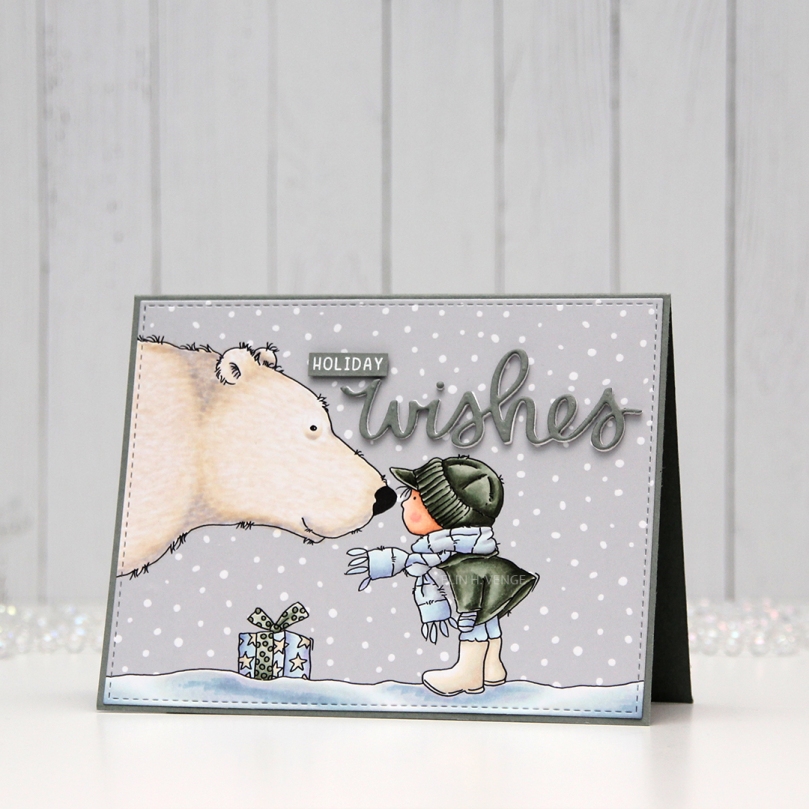 I created a top fold card from Stormy Sea cardstock from Papertrey Ink. It’s a color that matches the BG90 family from Copic really really REALLY well. I need to order more, I only have half a sheet left of this color. I used the same color cardstock to diecut the word wishes using a die from Mama Elephant that was free with purchase if you spent a certain amount during their birthday extravaganza back in September. Normally I’d diecut the word several times in the color I wanted, but since I was running super low on this particular grayish green, I used a few layers of white diecut words, and only one layer of the colored cardstock on top. I stamped and white heat embossed the word “holiday” from the Iconic Ornament stamp set from Mama Elephant, also free with purchase over a certain amount on the Mama Elephant site back in September. I added a few more layers of cardstock behind it for dimension and glued it to my sky using Gina K liquid glue, which I also used for the die cut word.

I decided not to add any additional elements. No embellishments, no nothing, I didn’t want to distract too much from that adorable image.

Not a lot of Copics for this one, and 14 of these were used for the snow and polar bear.

Hi, everyone! I’ve got a sweet, simple Christmas card to share today, featuring A Christmas Hug from Lili of the Valley.

I colored this image a while back, but only now had time to turn it into a card. I considered using a red card base for this, but really wanted the girl to pop, so I went with my trusty blue. This time I chose Blue Yonder card stock from My Favorite Things. 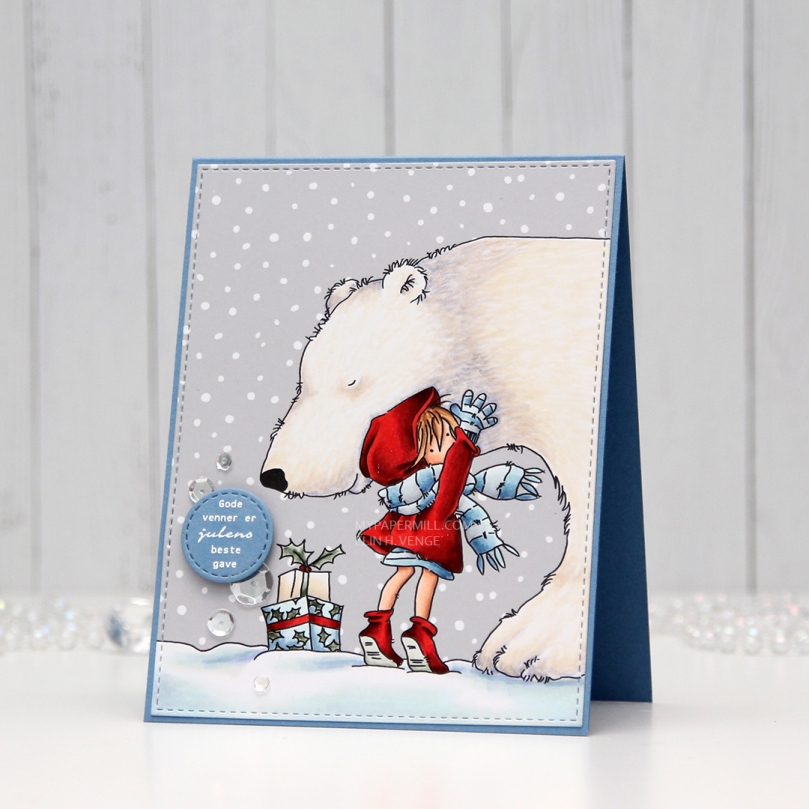 I die cut the panel with the girl and the polar bear with the largest faux stitch rectangle die from My Favorite Things from their Stitched Rectangles STAX 2 set of dies. 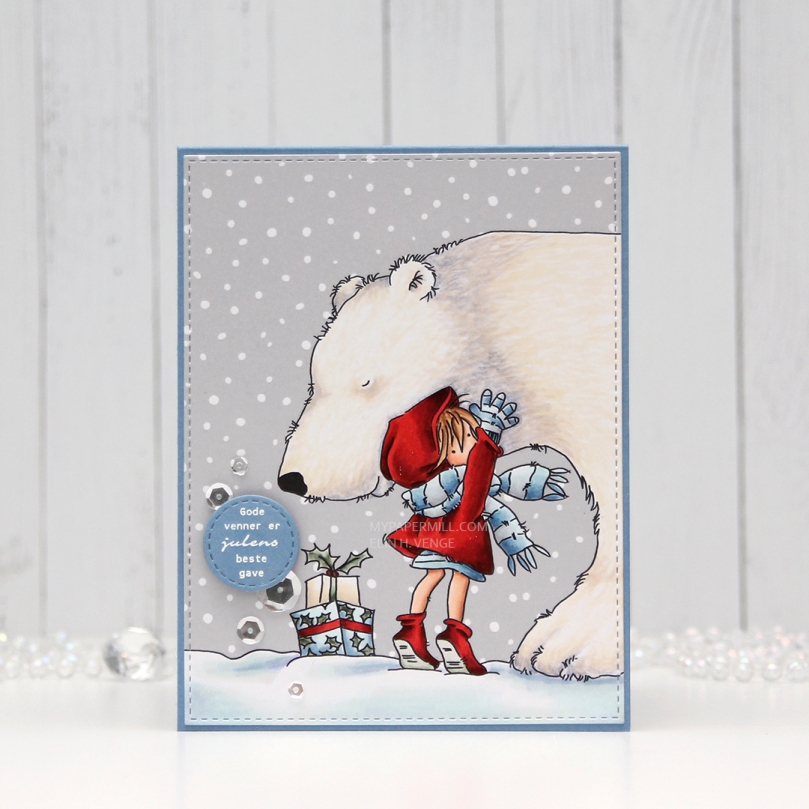 I used another faux stitch die to create the little circle for my sentiment, which is a stamp from Norsk Stempelblad AS. I stamped the sentiment in VersaMark ink and sprinkled on super fine detail embossing powder from Ranger before heating that until it melted.

I mounted my little circle sentiment with foam tape and had planned to leave it at that, but I managed to spill a drop of coffee on the snow portion of my image and needed to cover that up. One single sequin would look silly, so I added a few more to make it look intentional. No one will ever know that there’s a coffee stain under that smallest one. The sequins are sparkling clear from Pretty Pink Posh.

I use a crazy amount of markers to color snow…

Hi! There’s a new Halloween release out today from Lili of the Valley. So many cute images, and I definitely plan on doing some coloring later today, but for now, I have a slimline Christmas card to share, featuring the Friendly Snowmen digital stamp that came out a few weeks ago. 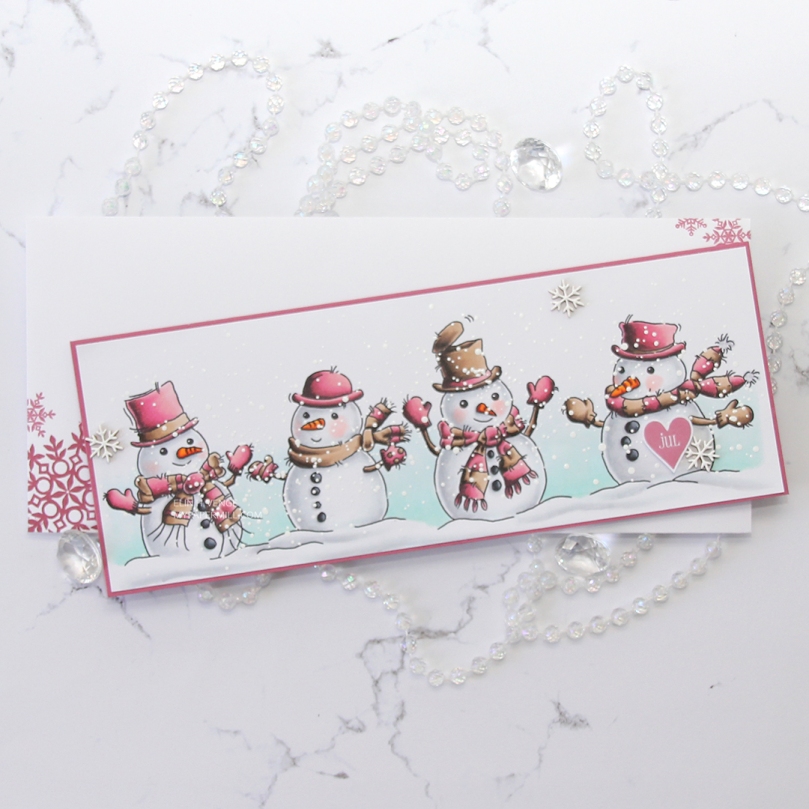 This color palette is definitely not the norm for me, but I was surprised at how much I like it. I think the secret was finding a pink combo I liked that wasn’t a screaming hot pink, and that also had a bit of contrast within it. Even better – my pink color combo matches the Autumn Rose color from Papertrey Ink, so I created my cardbase from a sheet of Autumn Rose cardstock and even stamped a few snowflakes from an old Simon Says Stamp stamp set (Holiday Envelope Sentiments) on the envelope using Autumn Rose ink. The envelope itself is a Deluxe white slimline envelope from My Favorite Things. 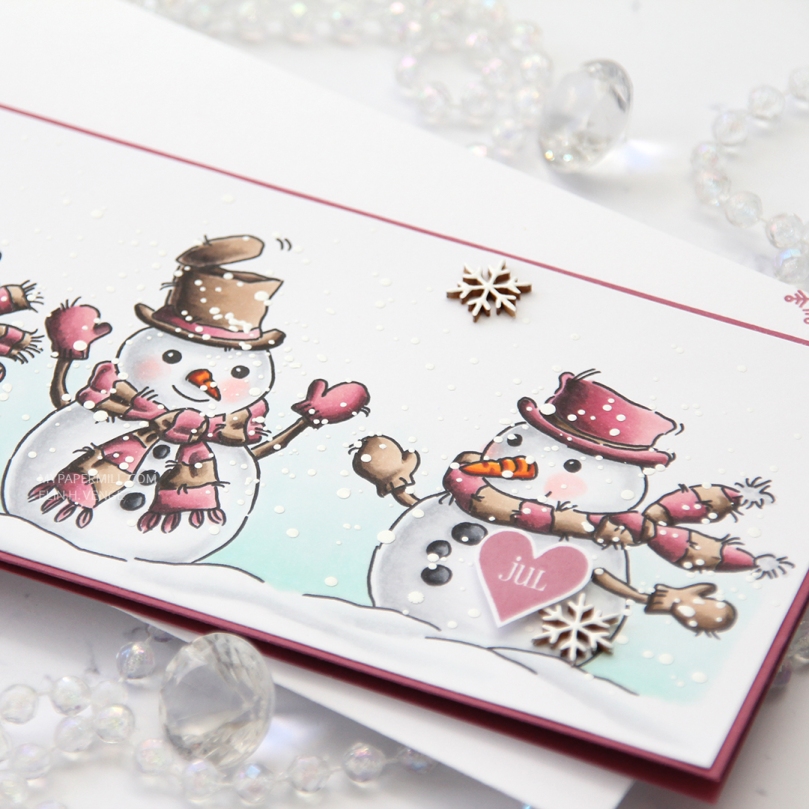 After coloring all my snowmen with Copics, I added a sprinkling of chunky white embossing enamel from Stampendous and heated my panel from the back until all the granules had melted. It warped quite a bit, so I ran the panel through my Gemini Jr without any dies, just sandwiching the panel between my cutting plates. That took care of the warping, and I could continue by gluing the panel of snowmen to the cardbase, before popping up a Norsk Stempelblad AS heart sentiment that I stamped using Autumn Rose ink. I also added a few Crafty Moly snowflakes that I covered in three layers of white embossing powder.

I’m still working on my holiday card, and this time it’s all about penguins AND a snowman.

This image was part of the Christmas release from Lili of the Valley that came out a few weeks ago, you can find the stamp here on Etsy. There’s a new release coming tomorrow, and it’s full of more Christmas goodness. And they’re png, which makes them so easy to mask and layer. I’ve shared my coloring of one of the new images over on Instagram. It was a polar bear, I couldn’t help myself. For this one, however, I colored up my little scene with my Copics and added white flock to the hats of the penguins for a little bit of fluffy texture. 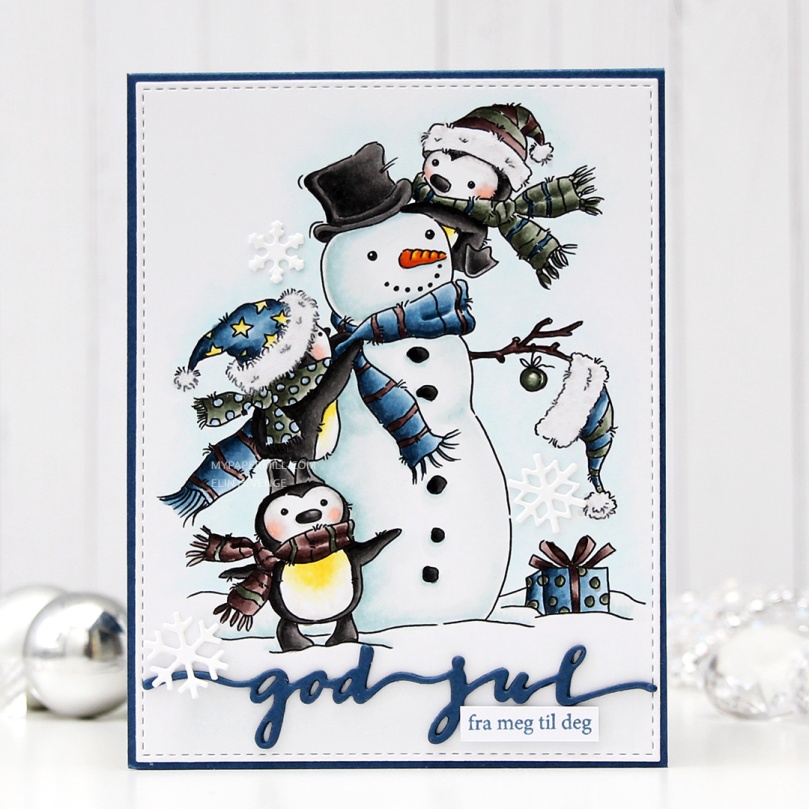 I diecut my panel using the largest die from the second of the two sets of Stitched rectangles from My Favorite Things and glued my card to a top folding card base I made from Enchanted Evening cardstock from Papertrey Ink. It’s my favorite dark blue cardstock, and that was the last little bit that I had, I’m now out of pieces large enough for cardbases. I used scraps of the same color cardstock to diecut my sentiment three times and stack them. The die I used is from Papirdesign. I added a stamped sub sentiment stamped in the same color ink and finished off my card with a few diecut snowflakes that I made using a die from Marianne Design.

And last, but not least, the Copics I used on this image. I’ve also made myself a BG71 that I used on the snowman in addition to the BG70.

I’ve got a super simple Christmas card to share with you today, featuring the Penguins Ho Ho Ho digital stamp from Lili of the Valley. This is such a fun stamp, and the size and orientation make it perfect for a portrait A2 sized card. 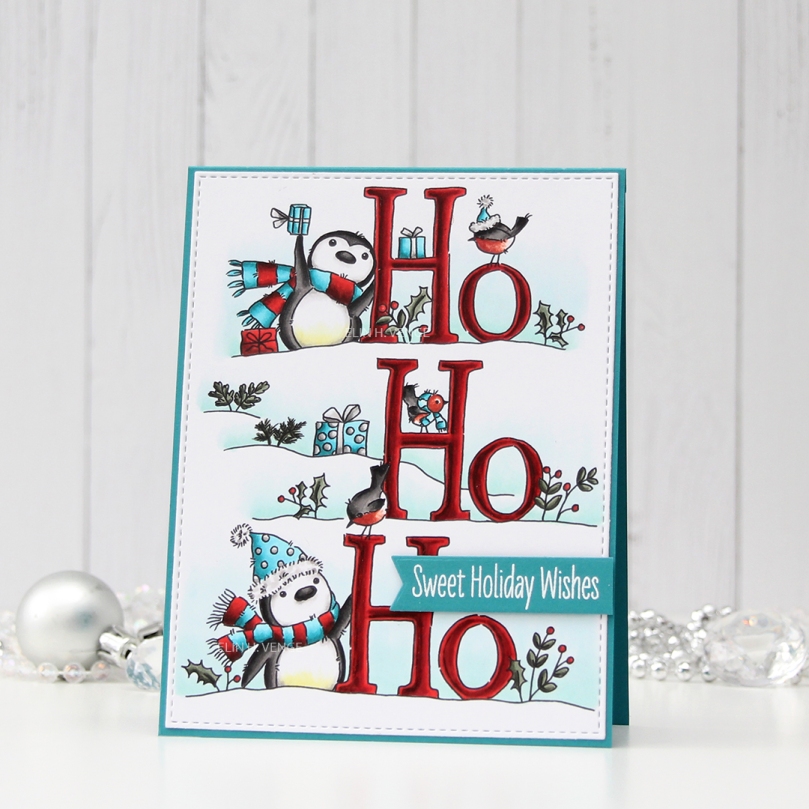 I colored my image using Copics. I don’t often use red on my Christmas cards, and I never pair it with green, but I love the look of red and gray or red and teal. For this one I went with both gray and teal, and I did my best to make the leaves in the image as “un-green” as I could by choosing the BG90s to color those in. A great little trick to coloring with red is to color in all the other colors first. That way you don’t run the risk of transferring red ink onto the other sections of your image if you accidentally color over the line into the red. 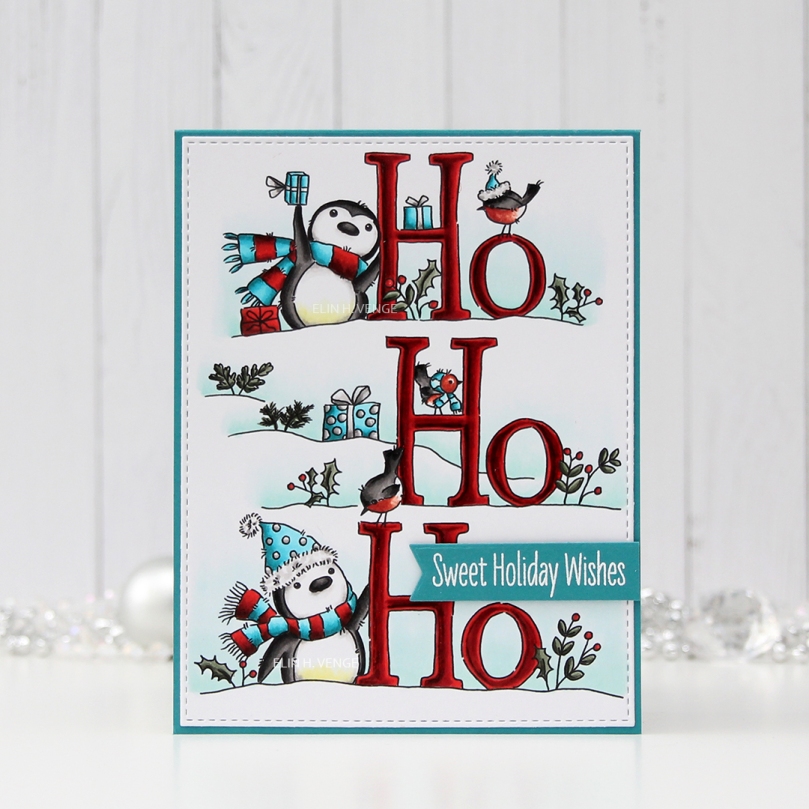 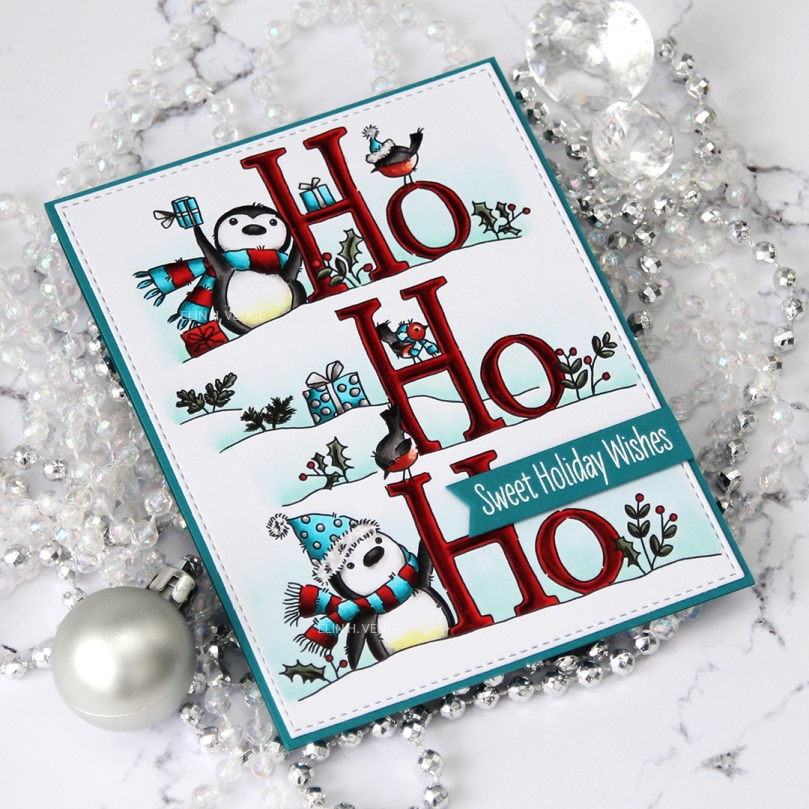 Here are all the Copics I used. The Es are all used to create my red color. I find that the actual reds (the Rs) in the Copic range are either too orange or too pink for my liking when it comes to Christmas reds, so I always use the Es for my base before going in with a couple of Rs at the end to make the color pop.