I’ve made another bag card with patterned papers from Pion design, this time a “big bag card”.

I found this much easier to make than the last one. It could be because this is not my first attempt, but I think it might have something to do with the size. The other one was so little that I trouble deciding what embellies to use and where to put them. This one was a breeze in comparison. 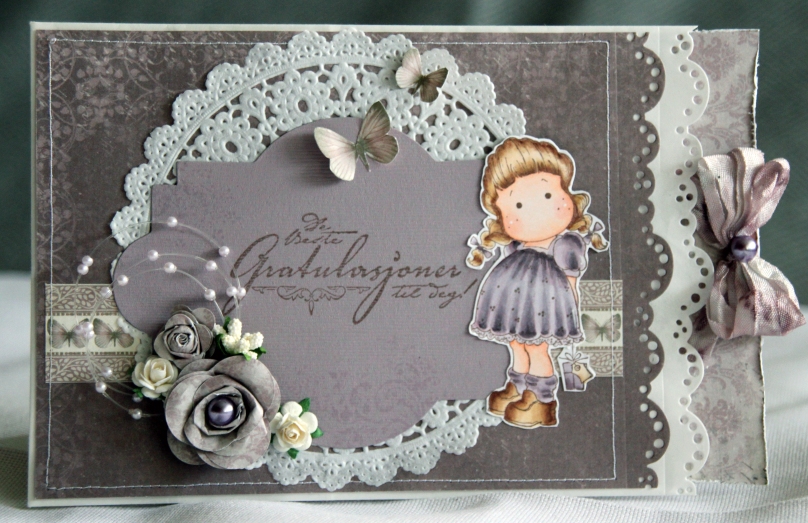 I must be making progress time wise, I did this card in ONE night. As previously mentioned, I’m a slooow scrapper, I contemplate and fiddle around with my project much much longer than I should, and actually don’t spend that long making and actually assembling the card. 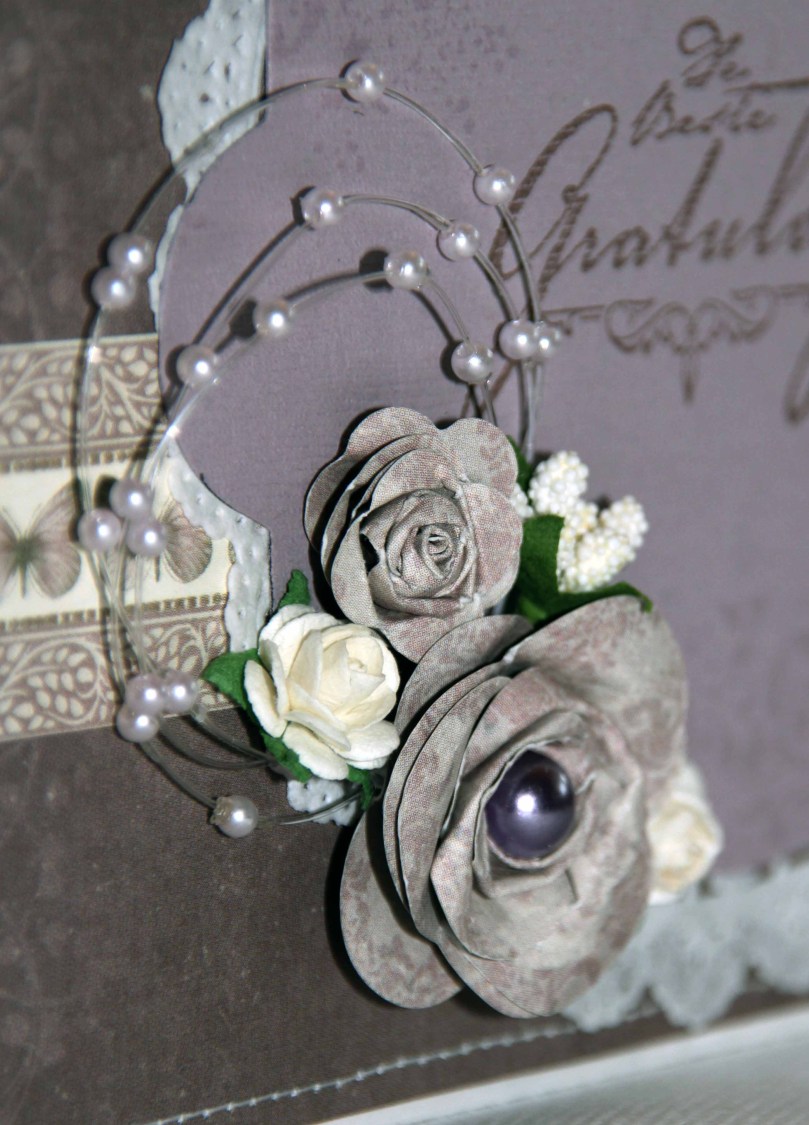 The purple flowers are handmade by me (this was the part that took the longest on this card) using the back of the patterned paper. The flower berries and pearl stems are by Kort og Godt, same with the pearl in the center of the big flower. The white flower is either by Kort og Godt or WOC (don’t remember). Doily bought at Panduro. I’ve sewn all the edges. The panel with the stamps (yes, there’s more than one, but the ones stamped with “Milled Lavender” are hard to see) is a die I bought last week at the candy store (a.k.a Bikuben), the stamps themselves are from Stempelglede.

Tilda with small gift is colored with Copics, as always. I’m trying to add more shading to the clothing, but don’t know how successful I am in my endeavors. A couple of my Copics have gotten sticky over the summer, and they’ve become very difficult to use, they don’t really blend with other colors and leave a shiny surface where that particular color has been used (it’s possible to see a little bit of this on her hair and her shoes in the photo above). Anyone else had this problem?? I’ve fixed it by replacing the brush nibs, but I’d like to know the cause, so I can avoid it in the future.

I’ve used a doohickey on the edge of the bag and the patterned paper. My trusty seam binding has been colored with Copics (as always), and I’ve put a Kort og Godt pearl on the knot.

The tag has been cut out of a sheet with nothin’ but tags, also by Pion. It’s been stamped with the same stamp from Stempelglede with Milled Lavender, it might be easier to see it here than on the front (bottom right on the tag). 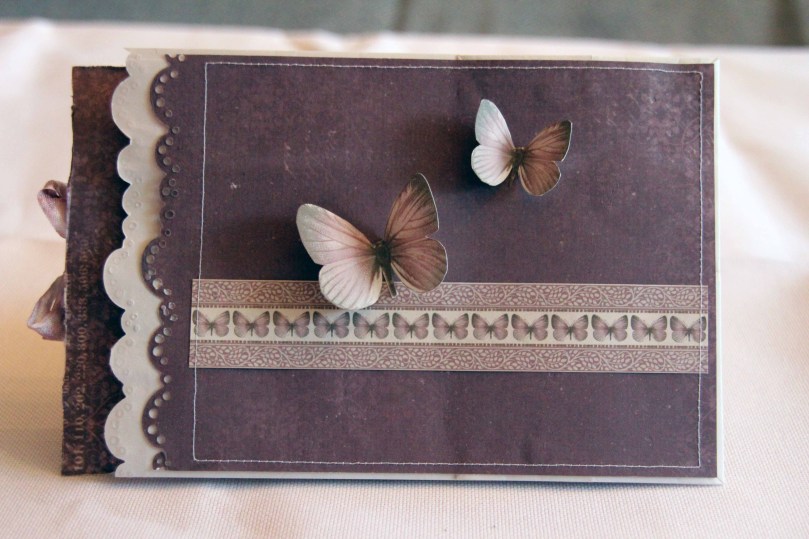 I’ve made the back very simple, a border and a couple of butterflies are doing all the work here. 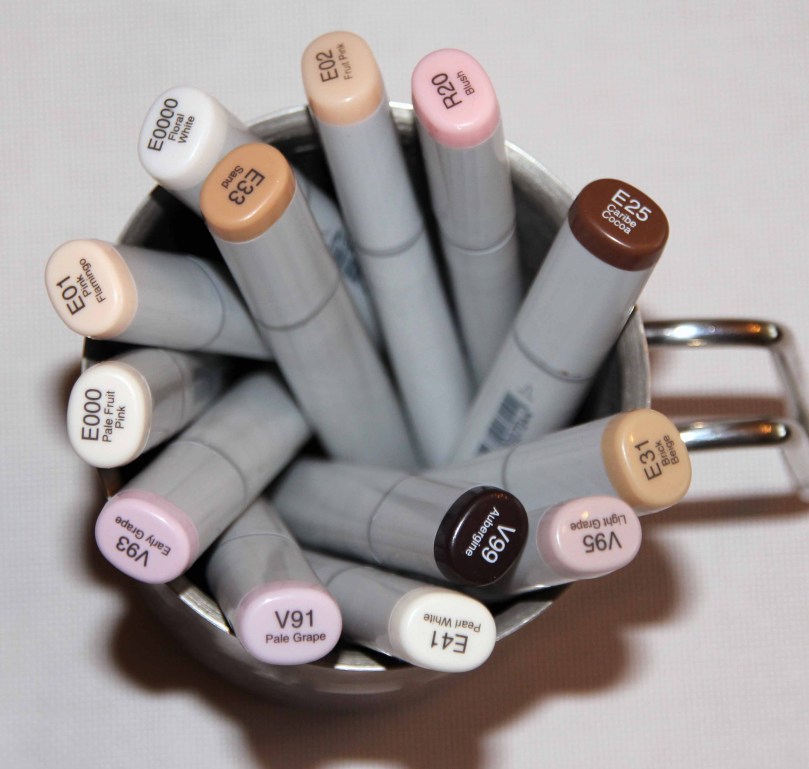 Last, but not least; the Copics I’ve used. E31 is the one that has been in a sticky situation.. 😉

Another Christmas card added to the pile for 2021, and it feels soooo good. It happens to be my third for the year, and my 30th card in total for 2021. If I can keep the 1/10 ratio going, I might be done with my Christmas cards by the end of summer. That would be amazing!!! ⁠⁠
There's a new release coming from Lili of the Valley later this week. This cute bunny hug image is one of the new ones in the release, and I wanted a soft color palette today. I also wanted to shake things up a bit, and opted for darker skin than I normally color. ⁠
Christmas gift tag? Already? You bet! Getting an early start saves me from having to scramble last minute. Flannel the raccoon from Purple Onion Designs is the perfect image for a gift tag, and when I asked @livefall for a color combo, she suggested pink and silver (aka gray). I don't normally create pink stuff for Christmas, but I had a blast creating this one.⁠⁠
This card is an ode to My Favorite Things. It's no secret that I love their stamps and dies, I don't think I use any dies more than my most used MFT dies. ⁠⁠
After a bit of an involuntary pause, things finally turned around this afternoon, and I was able to do sit down in my craft room and do a little bit of coloring. ⁠
It's been wet, foggy and pretty dreary the last few days, and I can't think of a better way to counteract it than with a bright, bold, colorful card with balloons! This Animal Balloons stamp from @rachelleannemillerart can be used for many different occasions. If you'd rather use a physical stamp, this image also comes in a stamp set called Sweet Celebration from My Favorite Things. ⁠⁠
I love this Baby Cloud image from Lili of the Valley, and thought I'd turn it into a fairly simple baby card. ⁠⁠
Rupert and Wilson from Purple Onion Designs are having fun! ⁠⁠
I tend to go overboard whenever I color rainbows. Actually anything in a rainbow order. I totally did that today, with 47 markers for this image from Streamside Studios, which isn't even that big. It's bright and happy, though, which is what I was going for.⁠